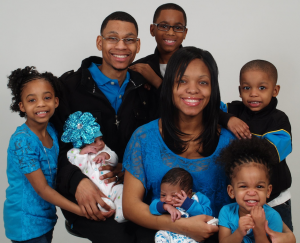 Keiwan is no stranger to the foster care system. When he was 10 years old, he and his siblings were removed from their mother’s home because of neglect. The siblings were split up and put into different homes–a sad circumstance experienced too often by foster and adoptive children. After Keiwan’s siblings were adopted by families from other states, he was forced to have only limited contact with his brothers and sisters.

Keiwan’s mother later gave birth to two more children, Keveon and Mariah. Sadly, she died in 2011, leaving Keiwan’s two youngest siblings without a caregiver. Keiwan and his wife, Jamie, knew that the only way to guarantee that these two children would remain connected to each other and to their maternal family would be to open their own home. They knew they could provide the stability and family that Keiwan was not able to have as a young child. Even though Keiwan and Jamie were young parents with two small children, they made space in their home and in their hearts to welcome 9 year-old Keveon and 6 year-old Mariah.

Keiwan and Jamie consistently put their children first. Keiwan is highly motivated to overcome the stigma of being a foster child, and has completed high school, remained consistently employed, and is focused on finishing college. Their family has a strong faith-based foundation, and works diligently to instill morals and values in their children. Keiwan and Jamie are leading by example to support Keveon and Mariah’s growth into beautiful, loving, and strong young people.

In early 2013, the Wilson family grew as Keiwan and Jamie welcomed a pair of twins! These parents have their hands full, but remain dedicated and loving parents in all that they do.

Keiwan knew what it was like to lose siblings. He didn’t want to lose his two youngest siblings–and he didn’t want them to lose each other.

If you are interested in learning more about how you can support siblings like Keveon and Mariah, please call (888) 625-8669 or email providecare@wolverinehs.org.