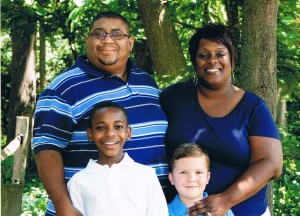 Families are made up of all different types of people. It is not defined by the DNA that runs through you or by the color of your skin, but by people who love you for who you are.

Justin has experienced a number of different family structures throughout his short life. He and his five siblings were removed from an abusive home in 2010. The children entered foster care, and Justin’s four older siblings were placed in different homes with their birth fathers. Justin was unable to live with his birth father, so he went with his little brother to stay with his brother’s paternal relatives. Justin’s resiliency was remarkable, allowing him to persevere while he searched for his permanent home.

Unfortunately, his first foster home was not a resting place for Justin. The family asked for his removal, due to some of Justin’s behaviors that they felt were inappropriate. By the time Justin reached his next foster home, he had been separated from his mother and all five siblings. He entered a home filled with people he had never met. The lack of stability in Justin’s life had him constantly on the move, from house to house with new strangers to meet.

It was among these strangers that Justin found his forever family in the Richardsons. As his worker, Justin’s adoption taught me a wonderful lesson: families are made up of all different types of people. “Family” is not defined as the DNA that runs through you, but by the people who love you for who you are and who are willing to do absolutely anything for you. DNA did not bond Justin to his foster family, but love did. Justin and his family are not the same race, like so many families that I have worked with. I admire them for knowing that the parts of us that make us different on the outside play no role in who we are on the inside.

Justin is a successful example of adoption in Michigan. Not only did Justin find a wonderful caring home, a loving family gained a son. They did not love Justin for the color of his skin but rather the content of his sweet nature.

When the time came to finalize Justin’s adoption into his forever family, I proudly stood up in court. I knew 100% that I had played a role in giving a child the absolute best home he could have, for the rest of his life.

When I see pictures of Justin with his forever family, I see the potential that adoption has to give a child a new chance.

If you are interested in learning more about how you can be a hero to a foster or adoptive child like Justin, please call (888) 625-8669 or email providecare@wolverinehs.org.