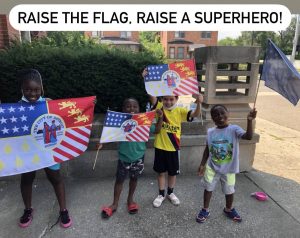 This weekend Raise the Flag Detroit is having a virtual live streaming fundraising event to benefit Wolverine Human Services.

We had the opportunity to talk with Ali Thrower, founder of Raise the flag Detroit and learn more about their mission and their vision for Detroit.

Ali started Raise the Flag Detroit about 12 years ago which is when the schools in Detroit started shutting down which meant the city of Detroit was losing all of it’s schools.

At that time Ali saw an article which asked the following questions:
What can you do to restore the pride in the city?
What can we do to raise money for the kids in the city who are losing these schools?
Ali thought of the flag of Detroit, it’s meaning and how he could use it to help with the issues being faced in the great city of Detroit. Some people find the flag to be too busy, it has been suggested to come up with a more simple design but it was decided that Detroit is not a simple place, so our flag isn’t going to be simple.

The flag of Detroit is full of meaning but more importantly it represents the rich history of the city. The center seal represents the great fire of 1805. The seal has 2 women in it- one is the woman of despair and the other a women of hope. It’s the latin words in the middle that provide a great message, a message we could all use right about now;
“SPERAMUS MELORIA” which means “WE HOPE THINGS WILL GET BETTER” and on the other side “RESURGET CINERIBUS” which means “WE WILL RISE FROM THE ASHES”.
These 2 phrases are so very powerful, reinforcing the ability to stay hopeful and strong while never giving up. This weekend we are proud and grateful to Raise the Flag Detroit for the message they are sharing and the support they are giving to the city of Detroit, and the Superhero’s at Wolverine Human Services.

This weekend we will Raise the Flag and Raise a Superhero.

Thank you for your continued support!